The holy shrine of Imam Reza maintains precious works in its treasury as one of the main religious centres in Iran. The libraries and museums of Astan Quds Razavi have paid a lot of attention to the presentation of these artworks. The treasures of libraries and the Astan Quds Razavi Museum are among the supreme centres considered by artists and researchers in Islamic studies. It preserves the most valuable artworks such as calligraphy, painting, book decoration, and handicrafts. Keeping and protecting these decorative motifs, as essential elements in Iranian art, has always been a part of Astan Quds Razavi's vital responsibilities. Art has been monopolized by religion, since the arrival of Islam in Iran. Mosques and religious sites soon became one of the main bases for artists. Khorasan is a vast land that has played a key role in political, social, and cultural developments and producing works of art in different historical periods. Mashhad was one of the important cities in producing these valuable works during Timur and his children. Islamic metalworks has always been considered by archaeologists and artists as one of the most prominent branches of Islamic art. Metalworking has found a high position in Iran from the past to the present. The art of metalworking was discovered in Khorasan and western Iran in the 7th and 8th centuries AH. The flourishing of metalworking art after the Mongol invasion emerged from western Iran in the early 7th century AH and gradually penetrated the Persian region of western Khorasan.
After the collapse of the Sassanid government and the beginning of the Islamic era, the only art that could continue its way without interruption was the art of metalworking. The art of metalworking quickly gained popularity due to its many properties. Gradually, humans realized the many capabilities of metal, such as its strength and durability. So as a very practical tool, artists decided to make use of it in the form of art. Also, due to the strength of the metal, it was considered a complete source by researchers and archaeologists. It became one of the most reliable evidence for the formation and evolution of the artworks in different historical periods. In the meantime, the art of Timurid metalworking with all its delicacies, motifs, decorations, and Islamic inscriptions had been considered so precious. This period in terms of the artistic developments that took place in it, is recognized a very significant era in Iranian art history because art had a unique technical structure, thought, and worldview.
The research on the artistic value of artworks can be examined based on the visual composition of the designs. One of the works related to the Timurid period is a steel window presented to the shrine of Imam Reza by Shahrokh, son of Timur. In addition to the plant and geometric arrays in the mentioned window, its embossed line works were also examined visually. Principles of aesthetics of metalwork during the Timurid period have increased the unity and visual appeal in this field of art. They have helped to increase the quality of art in this field.
The calligraphy found its prominent place among artists and people from the very beginning due to the recording of the divine word. After metal working artists realized the decorative nature of Arabic calligraphy, they tried to use calligraphy in creating their works. Examining the visual composition from the perspective of rhythm, fit, and balance of calligraphy with all plant and geometric arrays in this steel window's composition can help us aesthetically understand the artistic aspects of works of art in the Timurid times. Combinations are proportions, concepts, and definitions that add to the work's visual appeal in most visual arts. In terms of aesthetics, decorations and patterns of steel windows contribute to the positive and negative spaces of the lines. This article studies the permanent companionship between the illumination and divine revelation in the aesthetic features of the calligraphy, and analyses the window. Various issues such as fit, balance, visual tone, compositions, and positive and negative space are also examined. Shapes take on a different form visually from the space they occupy, Shapes have different types visually from the space they occupy, and due to the visual forces caused by the shape, they acquire a particular conceptual context., they acquire a separate meaning. In these inscriptions, the artist used various visual factors to strengthen and express the subtleties; including Islamic and Khatai motifs, lines such as Naskh and Nastaliq, and special gilding techniques described in detail below. 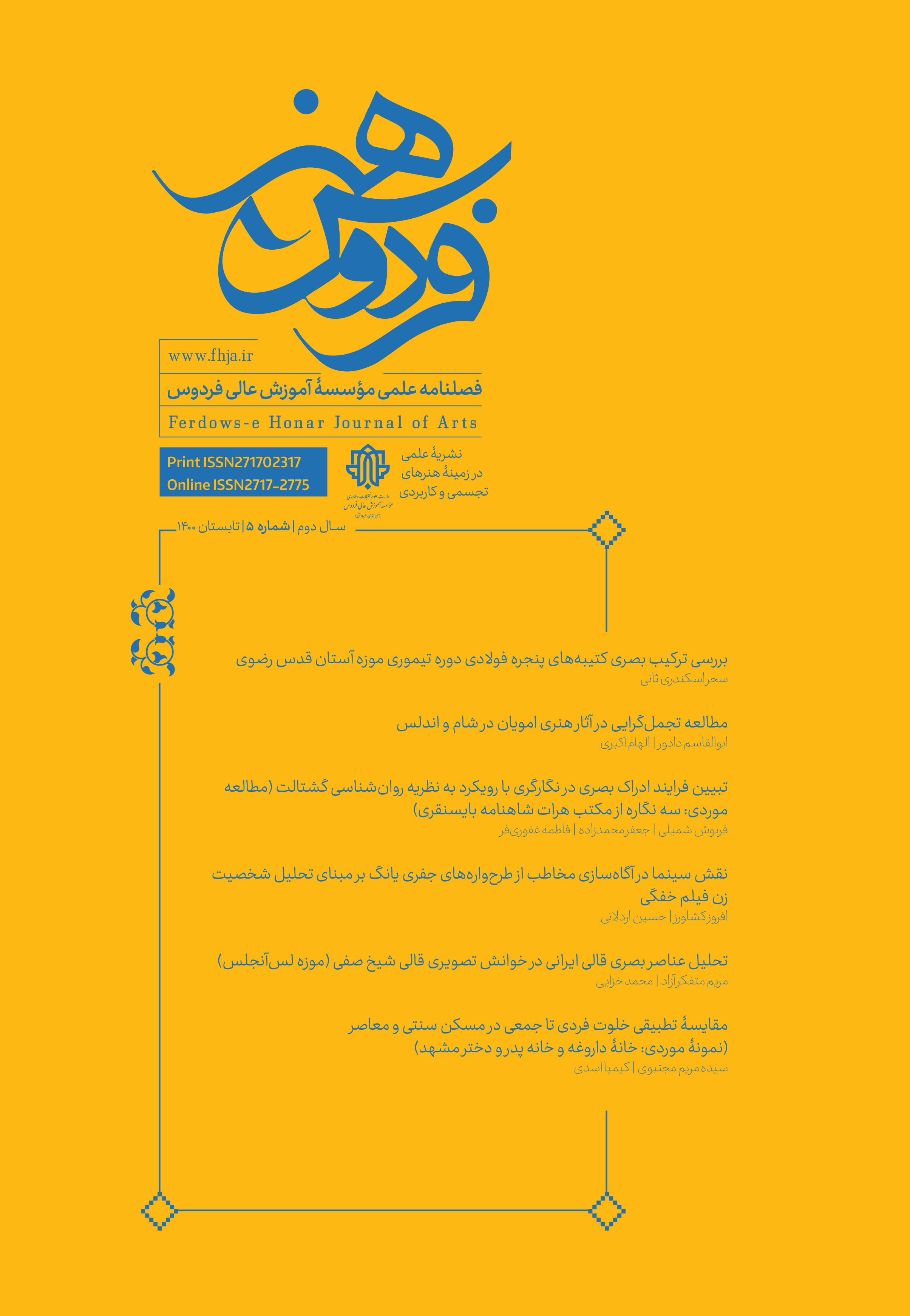