Statement of the Problem: Whenever we seek to express a novel concept or sentiment, i.e., to produce meaning (especially in a creative productions), we may encounter a semantic gap to establish artistic communication. In fact, we intend to express a concept or emotion, but we do not have the verbal or artistic (visual) possibilities. This means that we do not find a single word or object that is able to convey the intended connotation.  It is in such circumstances that we need figurative devices such as similes, metaphors, or stories. They enable us to reach new semantic domains by accompanying, substituting, or combining existing concepts, or objects.
Recently, Metaphor has been studied in many fields such as language, literature, philosophy and aesthetics. Scholars have studied metaphor with semantic, cognitive, pragmatic and rhetoric approaches. However, there are few studies examining the role of metaphor and metaphoric expression in various art media. Poster design, as one of the most widely used art media, has always included two important elements, visual and textual elements. Designers have used these elements as complementary objects. But it is noteworthy that contemporary Iranian designers, especially in the last decade, 1390s, have realized the potentiality of type and typography in poster designing and therefore have used type and typography as nearly independent medium.
A comparative review of recent researches in 1370s-1390s, showed that designers' tendency to use type as the main element of a poster began almost in the mid-1370s and peaked in the 1390s. So, most of the posters designed in this period are based on type. Due to the fact that there is a wide variety of Iranian type-based posters, the ones which were designed for different events and exhibitions (in Azad Art Gallery) in the last decade have been selected to be analyzed.
Previous researches have studied ‘typography’ only on its form characteristics, but in the present study, the relation between form and content has been considered and the types of metaphorical expressions in poster typography (especially type-based posters) have been analyzed.
Through metaphoric analysis of nearly 500 posters, we have found different metaphoric expressions created by Iranian contemporary designers through the use of typography to express the intended notion of the poster. Then, through comprehensive analysis of different metaphoric expressions we have found some common patterns, most importantly the metaphoric expression of deconstruction.
Metaphoric expression of “deconstruction” is the one in which the visual elements (type in particular) are conceptually reformed (redesigned) to express intended notion of the poster in novel and eye-catching ways. We have found that this metaphoric expression, deconstruction, in its different shapes or forms is the most common expression among all other metaphoric expressions we have noticed in the posters.
Purpose of the article: In this article, we did metaphorically analysis of Persian Type in Recent Iranian type-based poster designs to find metaphorical relations between type and other visual objects, with a focus on “Metaphorical Expression of Deconstruction”.
Conclusion: Data obtained from this study has proved that most posters designed by contemporary Iranian designers in 1390s used type and typography as a more significant visual element than images. Additionally, the most common metaphoric expression of type and typography, being used in the posters, is different expressions of the concept of “deconstruction”. ‘on the verge of deconstruction’, ‘fracture’, and ‘melting’ are all different figurative expressions of the concept of “deconstruction” or as we call it in this paper metaphoric expressions of deconstruction.
We have found three prevalent patterns in the metaphoric expressions. The first dominant pattern was "on the verge of deconstruction", the designer makes changes in the traditional way of using type and writing. In this case, the ‘type’ deviates slightly from its standard form, but does not completely disintegrate, and the visual elements as intermediaries prevent their complete deconstruction. In the second found pattern, metaphorical expression of "fracture", the ‘type’ loses its completeness or totality and finds a deformed shape. Therefore, the type is usually depicted in the form of three-dimensional and fragmented elements. In other words, one single word in the poster can presented in pieces of a broken glass or paper. In the last group, metaphorical expression of "melting", the designer visually melts the text to represent the concepts in the poster. In fact, the idea of letters or words being melted is an attempt to show the underlying idea of deconstruction.
Finally, based on the results of this study we can claim that the "metaphorical expression of deconstruction" can be considered as a widely used model by contemporary designers. In this type of metaphorical expression, the designer considers type as the main visual object and tries to make a connection by creating a conceptual relationship between the type and the main idea of ​​the poster. The metaphorical expression of deconstruction transforms the type in favor of the intended concept and notion of ​​the poster. 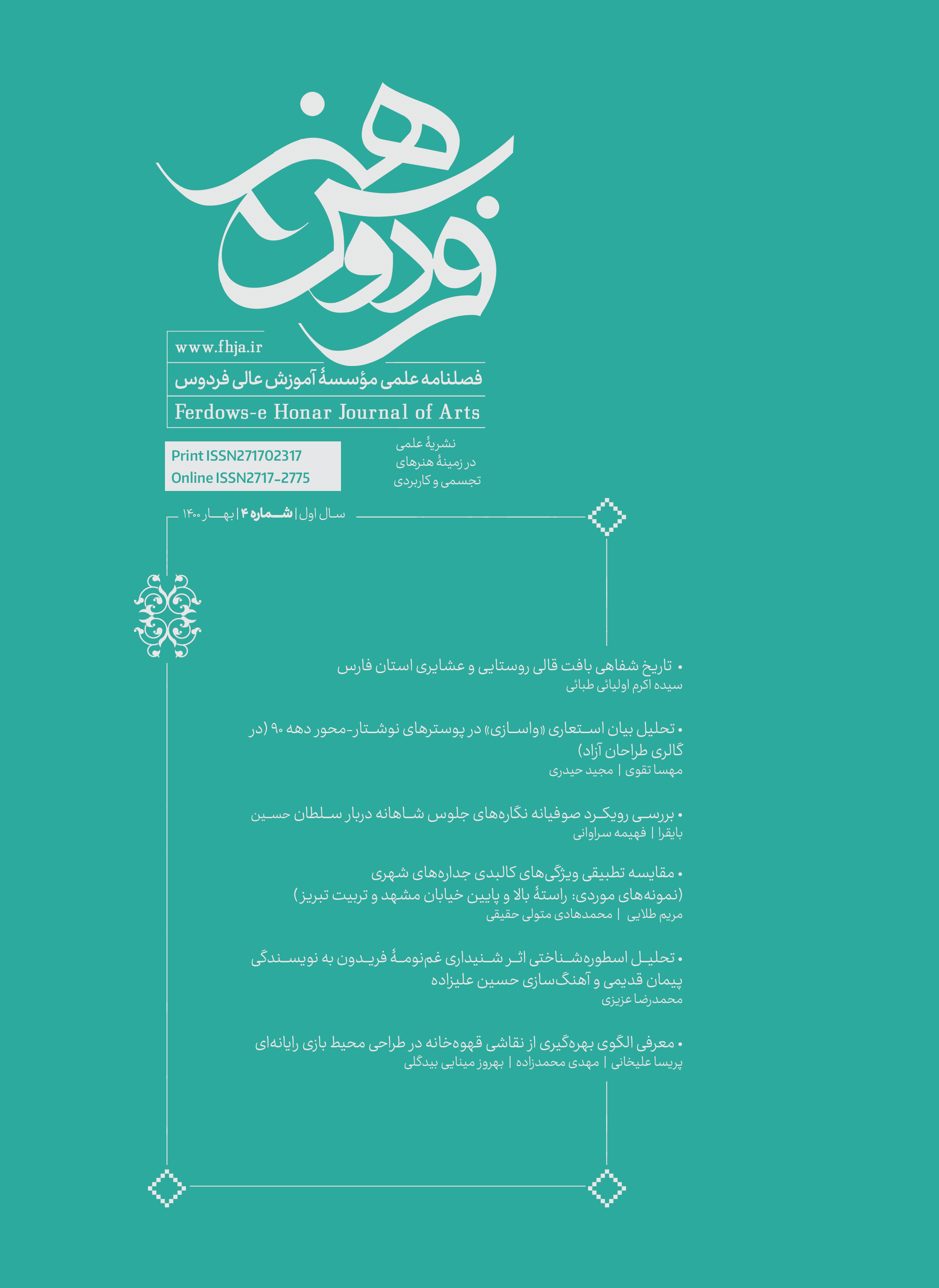