Islamic illustrated manuscripts show us the most beautiful works of beautiful techniques and industries, engraving, gilding, decoration and painting.

The oldest Islamic manuscripts, which have many pictures, are books that have been translated or written in medicine, science and mechanical technology, and the most famous of them is the book "Al-Hail Al-Jame 'Bine Al-Alam wa Al-Amal". Then there is the book "Ajaiebe Makhloght" of Qazvini. Some literary books have also been seen in which excessive attention and attention have been paid in this regard, especially in each of the two books "Kelileh and Demneh" and "Maghamate Hariri " in which forms have been drawn to clarify the text report and description. And have painted. This was done by Eastern Christian teachers and church men or some Muslims who were influenced by his technical style.

Europeans have paid a lot of attention to the research and study of painting of the Islamic era and the buildings and structures of this period. The art of Islamic periods has been written and arranged in an orderly and clear historical manner. Arnold and his colleague, among others, have written a special book on the science of bibliography and its diagnosis.

There is no doubt that in order to express an issue and describe it along with a measured and coherent text, it is necessary to use clear and beautiful images along with the text. Medical science and anatomy are no exception to this rule, and it may be necessary to include images related to the text to better convey the message.

One of the scientific fields of which many versions are available is the field of medical science. The study of human anatomy is seen throughout the excellent history of Iran. For thousands of years, morphological descriptions have originated from this point in the world and formed the basis of modern anatomy.

Iranian physicians have sometimes used themselves and sometimes some painters to draw images of human and animal organs for their understanding. The present study has been compiled with the aim of examining the illustrations in the illustrated manuscript of the "Zakhire Kharazmshahi" preserved in the National Library with the registration number. 814227

Purpose of the article:

Objective In this study, after presenting a brief history of illustration and medical science in Iran, we will identify, introduce and study this manuscript. In the illustration of medical manuscripts illustrated in Iran, the predominant subject is mostly the science of anatomy. Of course, illustration can be seen with other subjects such as medicinal plants, animals and veterinary, the relationship between teacher and student, various tools and methods of medicine and medicine, including phlebotomy or bloodletting and dentistry.

- Maternal and fetal circulatory system in the uterus

This article tries to answer these questions:

- Who did the illustration of these colored statues?

- Did such illustrations express a special style such as illustrating literary versions?

- To what extent has the illustrator's skill and mastery in observing the principles and rules of illustration?

This research is descriptive-analytical and is a method of collecting library information.

In design, it should not be the anatomy of the goal, but it should be a means to achieve the goal that is the design, and this is while in this treatise, the subject is completely opposite and the goal; More emphasis is placed on the discussion of anatomy and image medicine.

Seyyed Ismail Jorjani's masterpiece is his "Zakhire Kharazmshahi" book. The first plan in compiling a reserve consists of 9 books or 9 sections, and after completing these 9 books, two more chapters are later added to their own compilation.

After examining the pictures of the illustrated version of this book, it can be said that; In drawing some organs such as face, eyes, nose and lips, extreme care and skill have been used and it has definitely been the work of an artist and painter Dominate with design and illustration. But in other organs, such as the hands and feet, such precision has not been used, and sometimes to create volume in the limbs and the body around the body, evenly (like a strip) around the limbs has been drawing using paint.

These drawings are due to differences in the style of illustration so It can be produced more than one.sometimes it seems a copy of the original version.Also, according to studies from various sources, the origin of these images maybe goes back to Hellenistic art.

The results of the study indicate that the illustration in this book did not correspond to the style of literary versions. This research can be used for art and medical students 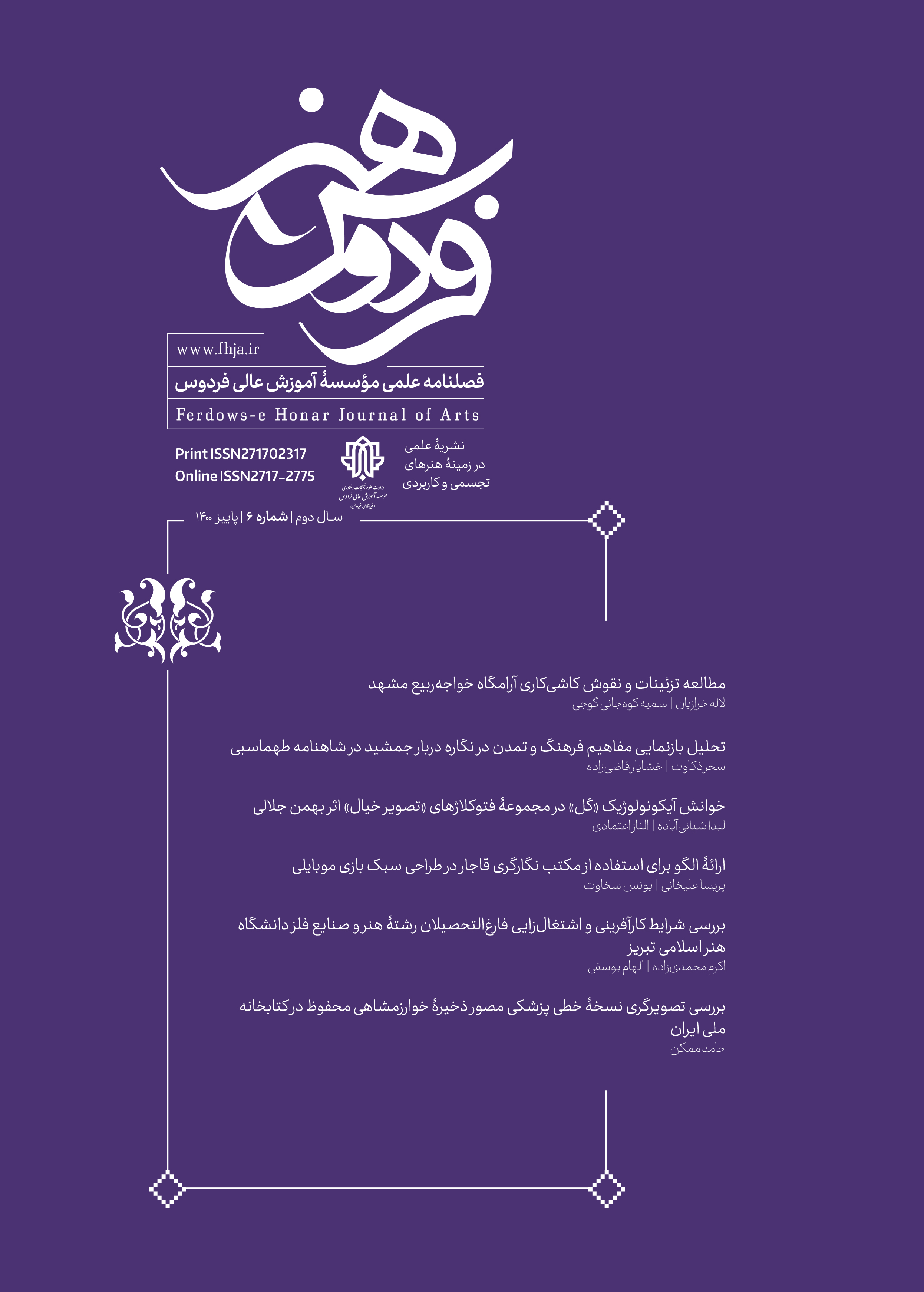